Ever get a day when you are really in the mood for a certain thing to eat, I mean one that you really must have? It doesn't matter if it takes a long time to make or if it is something a little too fattening for your healthy eating all week plans. Tomorrow is a good time to eat healthy too. Today happens to be a perfect baked potato day.

I have been  thinking about a good baked potato ever since my family went out to dinner the other night. One of the appetizers was potato skins, I know what a baked potato skin looks like. Years ago, I started making potato skins by scooping out all the potato, brushing the skins with butter, and baking them till they were crispy. Delicious! Sometimes, I added cheese and bacon, really good.

The potato skins the other night  were really baked potatoes. They were served using 3 big potatoes cut in half, each half had cheese and onions on them. Sour cream on the side. They were pretty good but everyone changed their order that was accompanied with a baked potato.

So, this morning I decided that I wanted a big baked potato with all of the fixings. I went to the  grocery store to buy the nicest and biggest potato that I could find. Everyone knows what that is like, going to the store and looking at the stock of potatoes and finding the best unblemished potato there. That is what I did.

The potato tastes good all by itself, but lets face it accompaniments are great. I think the #1 is  Cheese is always a good choice but what kind? My choice was extra sharp yellow cheddar cheese, my favorite, but you can choose any cheese that you desire.  I was going to turn this cheese into a nice creamy, silky sauce to cover my potato.

Butter is another important accompaniment for my potato.

Bacon also goes well with a baked potato and again who doesn't like bacon. I like mine crisp, but Travis will eat bacon not so well done, but that is a preference.

A big dollop of sour cream for that cool creamy taste on your hot baked potato. It  is scrumptious.

Some scallions will add a small mild bite to the potato, must have that.

Finally I will top the potato off with a fried egg for extra goodness.

Scrub the potato until it is clean then place it in a 425 degree oven for about 50 minutes. Until a knife stuck in the center goes in easily. The time depends on the size of your potato. 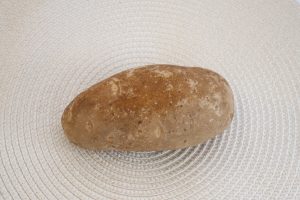 Next it is time to make the cheese sauce 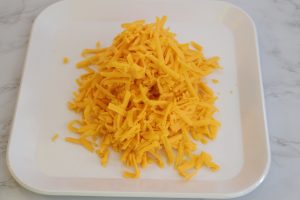 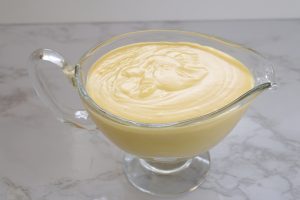 Slicing the scallion for the potato is easy. I wash the scallions and cut the bottom end off. Then I slice them into small pieces. I just used the white end but you can put the whole scallion on if you want.

Since I only need 2 pieces of bacon, I just threw the bacon into the microwave for a few minutes until it was crisp and then set them onto a paper towel to soak up some of the grease from the bacon. 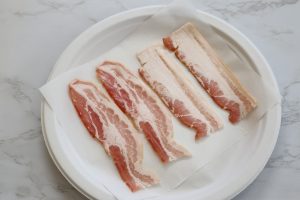 4 slices of bacon ready to be cooked 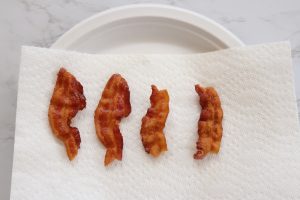 When the potato was done, I let it sit for a few minutes, too hot to touch. Then I cut it down the middle at the top. Then I pushed it together from the ends. With a fork I scraped at the potato until it was not one solid piece of potato.

First, pour the cheese sauce onto the potato to give it that delicious cheesy taste. The sauce can fall down into the crevices of the potato. 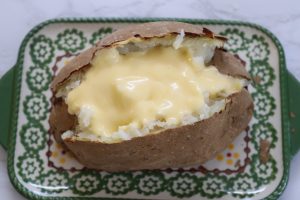 Add some butter for the delicious taste it gives a potato. 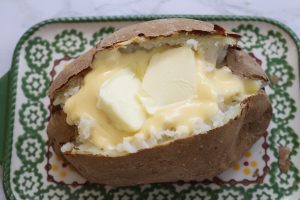 Sour cream is a must and I added a big dollop. 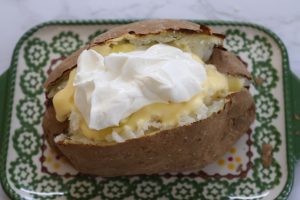 Next a couple of crispy fried bacon to give it that smoky, bacony flavor. 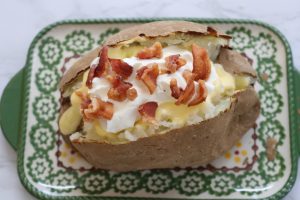 Loaded baked potato with bacon on the top

Scallions sliced and dropped onto the top of the potato. 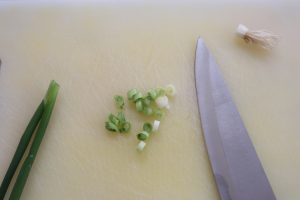 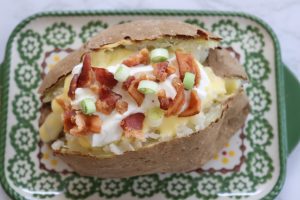 Now trying something new. Since potatoes and bacon go so well together, I am adding a fried egg to complete my over the top baked potato. 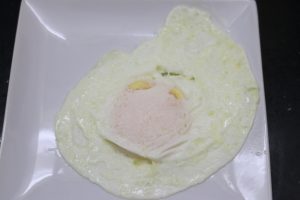