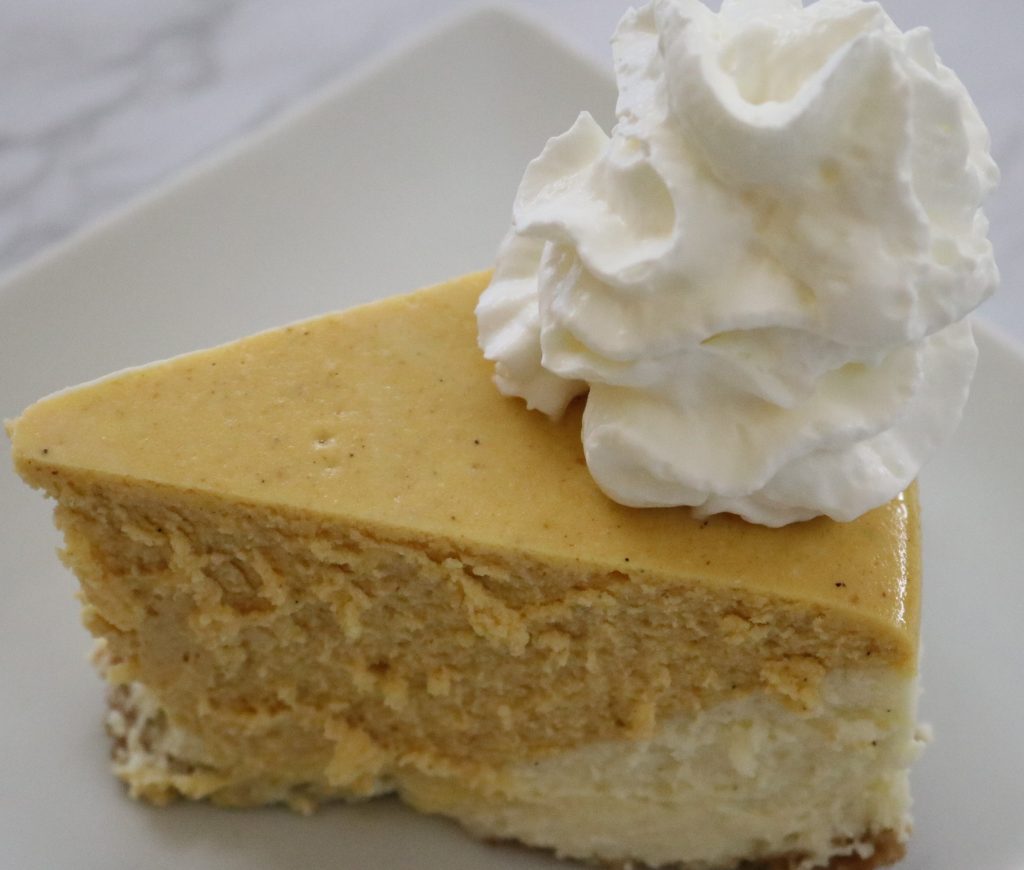 Cheesecake and pumpkin pie are two of our favorite desserts, wow! Mixing the flavors together is out of this world. We were thinking what to make with pumpkin and we were just in the mood for something pumpkiny, and Travis suggested cheesecake, great idea!  We both wanted something a little different, so we made cheesecake with a layer of pumpkin cheesecake.

This cheesecake is very creamy with both the flavor of vanilla and pumpkin. When the Pumpkin was added to the vanilla cheesecake, it pushed the vanilla up a portion of the side of the pan. We were not quite sure what it would look like, hoped it didn’t just all mix together, but it didn’t. The flavor of both are separate and exceptionally good. Our whole family thought it was great which is what we want to hear when we put a recipe together. They are of course our tester since we can’t try it out on others during the virus.

We started our cheesecake with a rich buttery graham cracker crumb. Just put graham crackers into the food processor with some sugar. Now, add the butter slowly and process until the crumbs start to come together. Then just dump them into an 8-inch spring form pan and bake for about 6 or 7 minutes till they get firm. 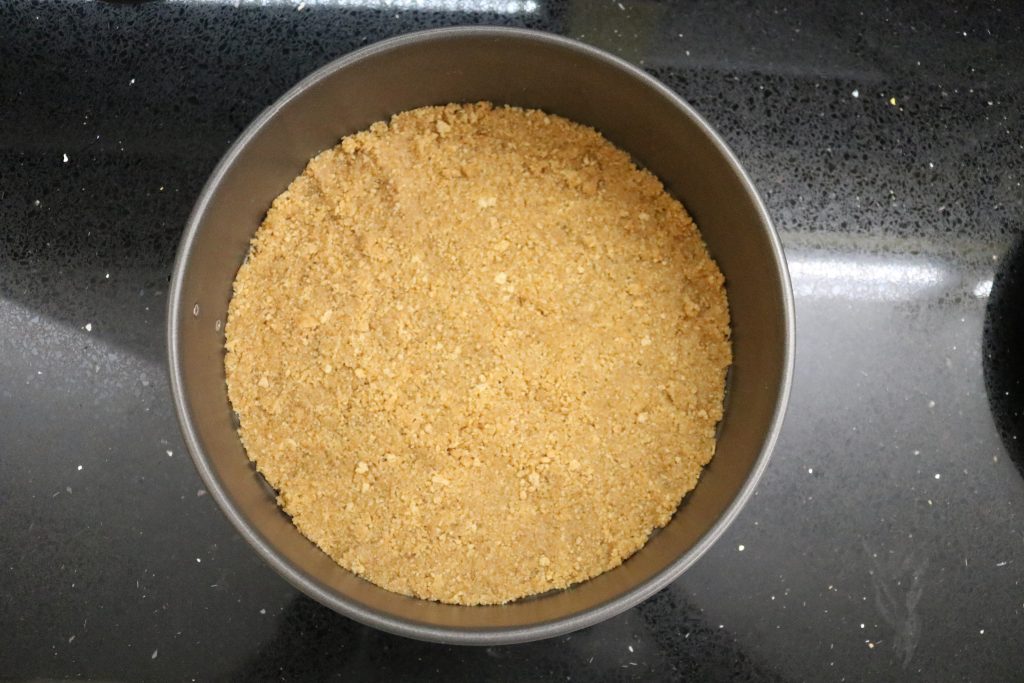 Now to the cheesecake. Make sure that your cream cheese is softened before starting. Then, in a stand mixer, put the 3 packages of cream cheese and whip until fluffy. Really looks good now, but we must add the remaining ingredients. Add the sugar and mix for 1 minute, then add the sour cream and cornstarch and mix for another minute. Now, its time for the eggs, just beat for about ½ minute, then add the heavy cream and the vanilla bean paste. Whip until just mixed and its ready. 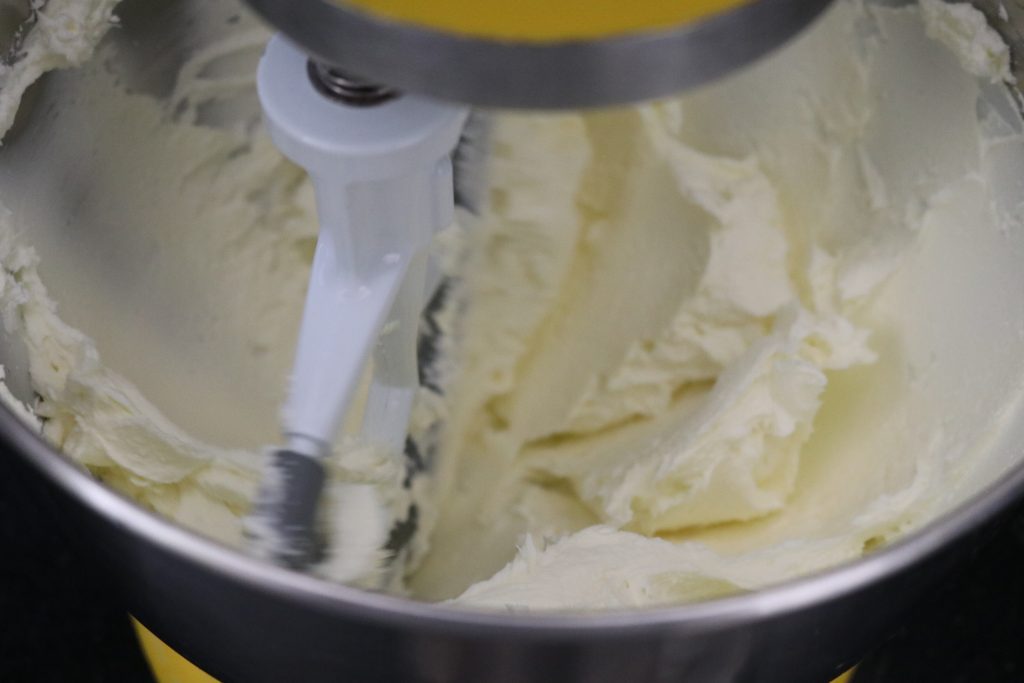 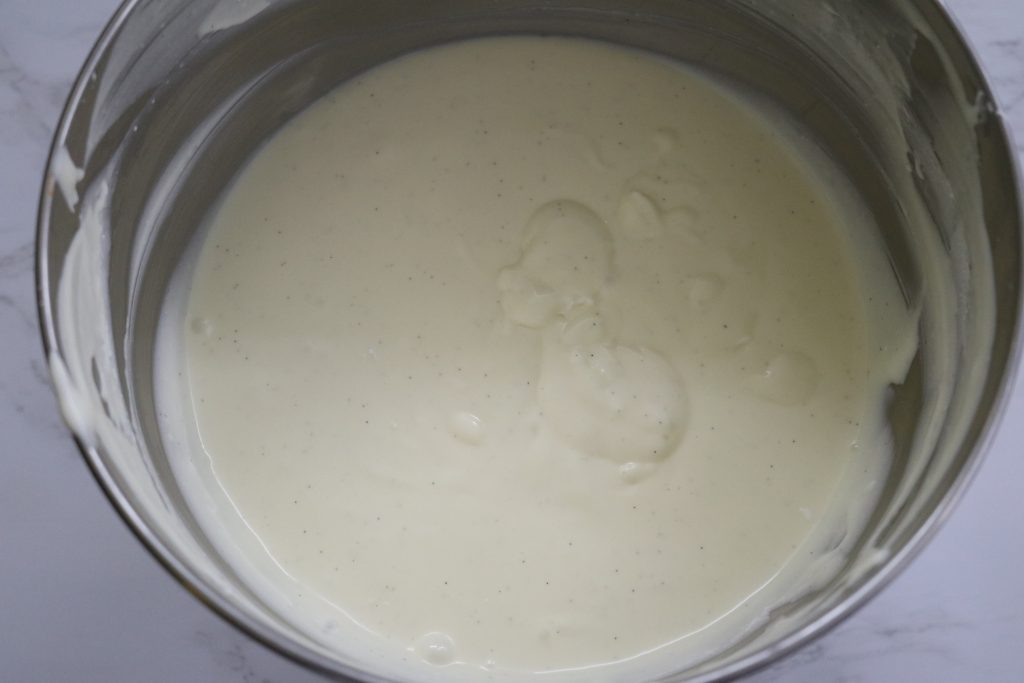 Pour half of the mixture into the springform pan and spread to fit the pan. 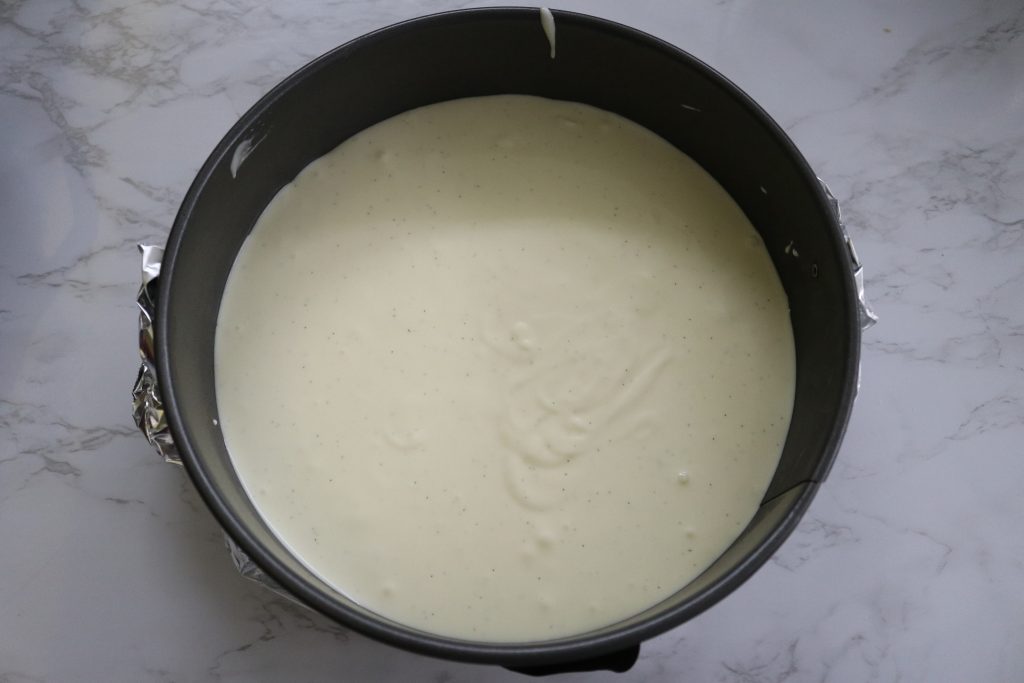 Now to the remaining cheesecake mixture: add the pumpkin, cinnamon, and ginger and mix, Just until combined. 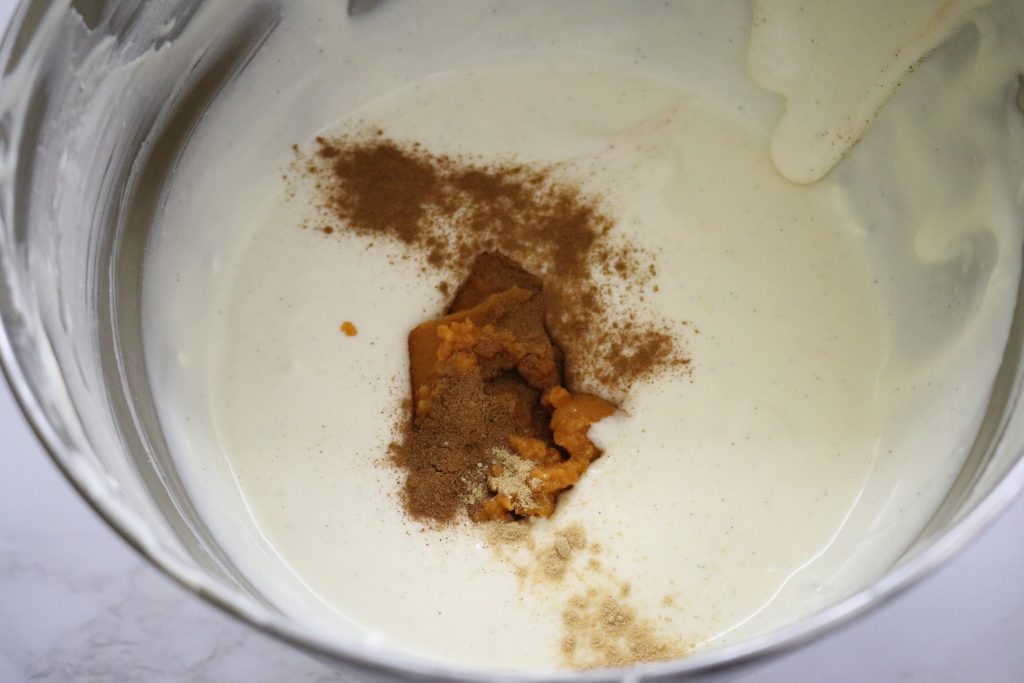 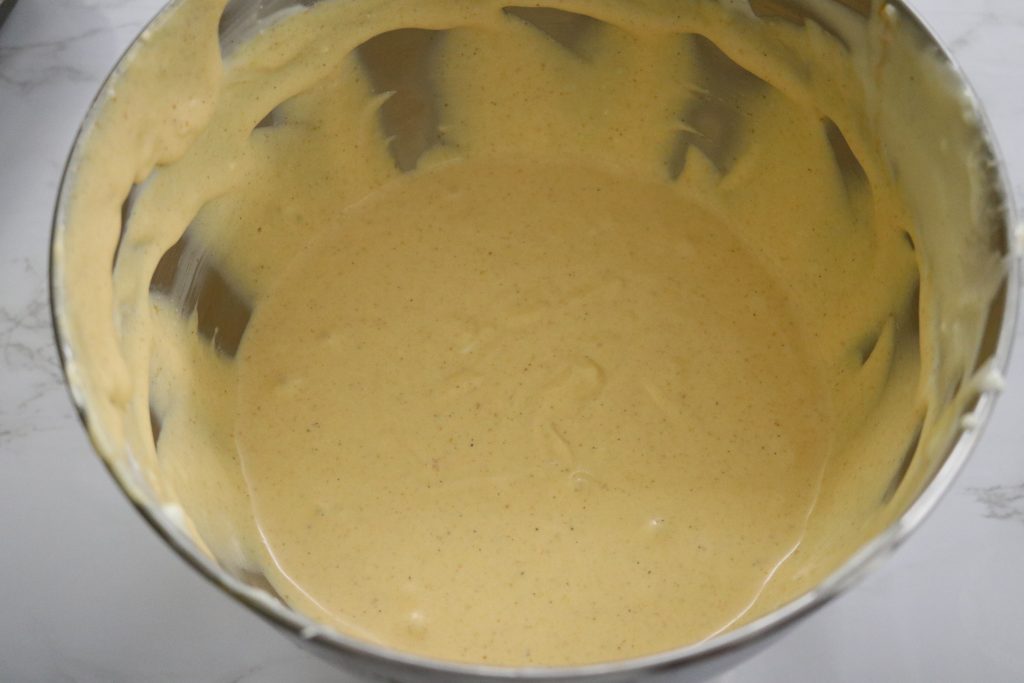 Slowly pour the pumpkin filling over top of the vanilla filling. Before putting the cheesecake in the oven, wrap the springform pan with aluminum foil in case the pan leaks a little. 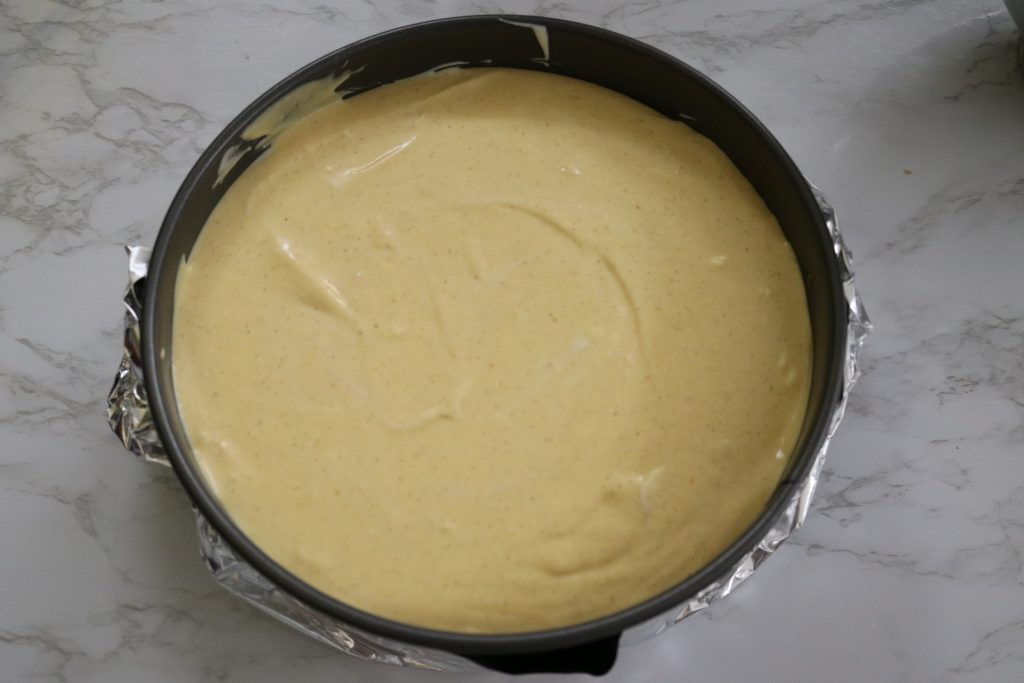 Pumpkin cheesecake filling on top of the vanilla

Put the pan in another pan with hot water halfway up the side of the cake pan. This is a water bath and it helps the cheesecake from cracking. 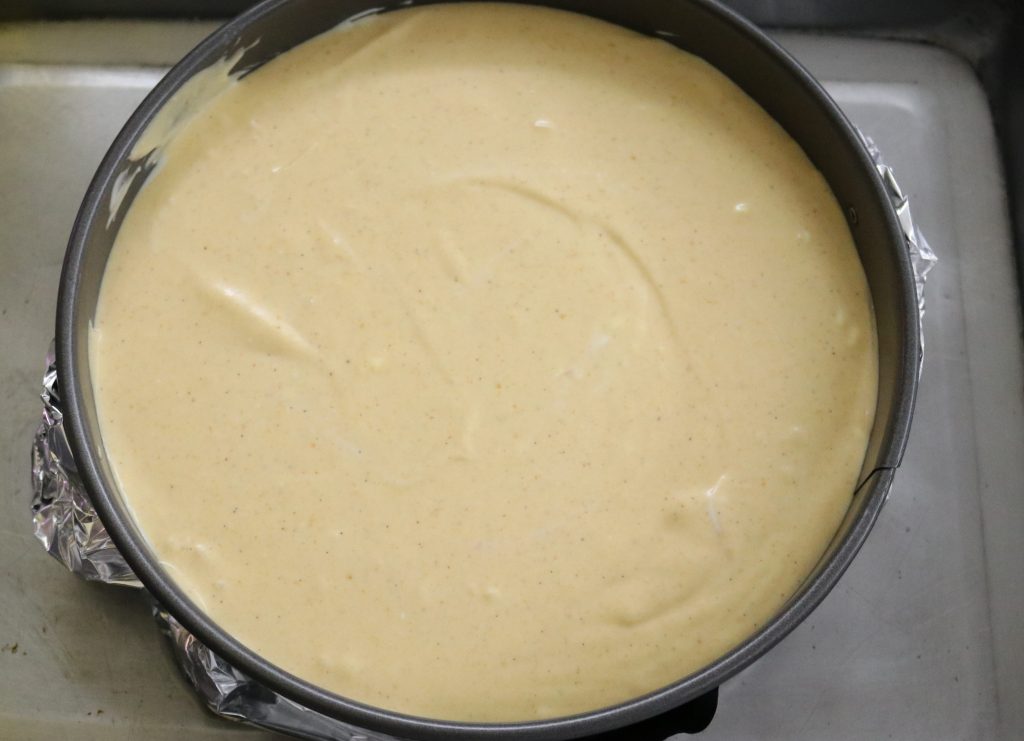 Cheesecake in a waterbath

Put the cake in the oven and bake for about 35 to 40 minutes. The cake should be set all around but the middle is just a little jiggly, not much. Turn the oven off and let the cake sit in the pan in the oven for another 30 minutes. Then, take the cake out of the water bath and leave it set for about 15 minutes. Once it is done cool, put the cheesecake into the refrigerator and let it get cold for at least 4 hours or better yet, overnight, before cutting. 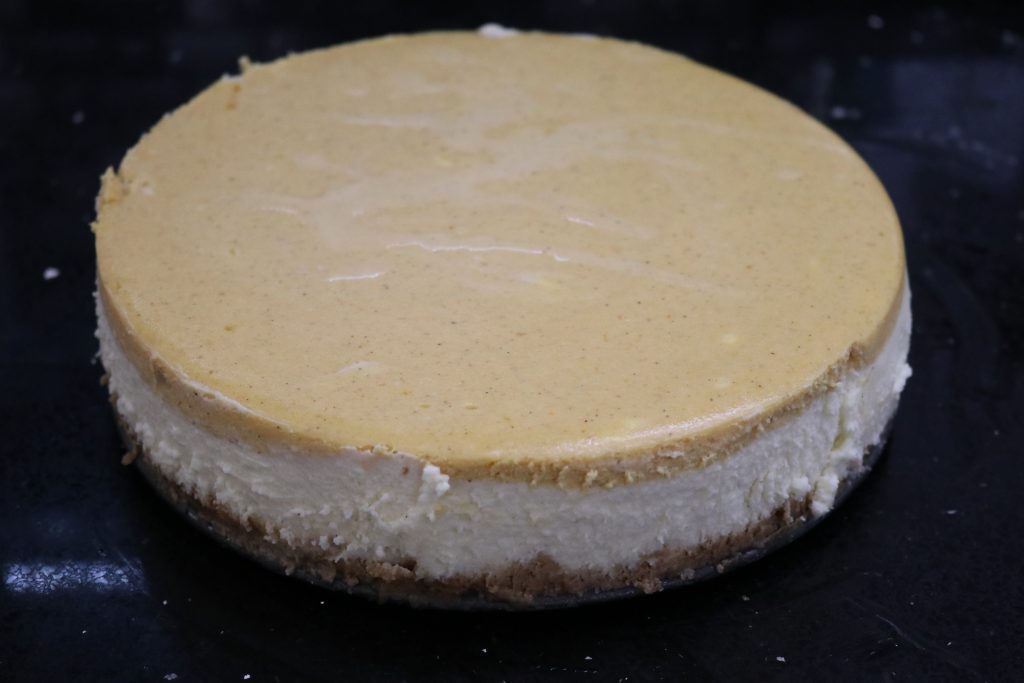 Pumpkin vanilla cheesecake just out of the pan

Here is the finished result. A perfect slice of cheesecake with a topping of whipped cream. Two great flavors, one on top of another! 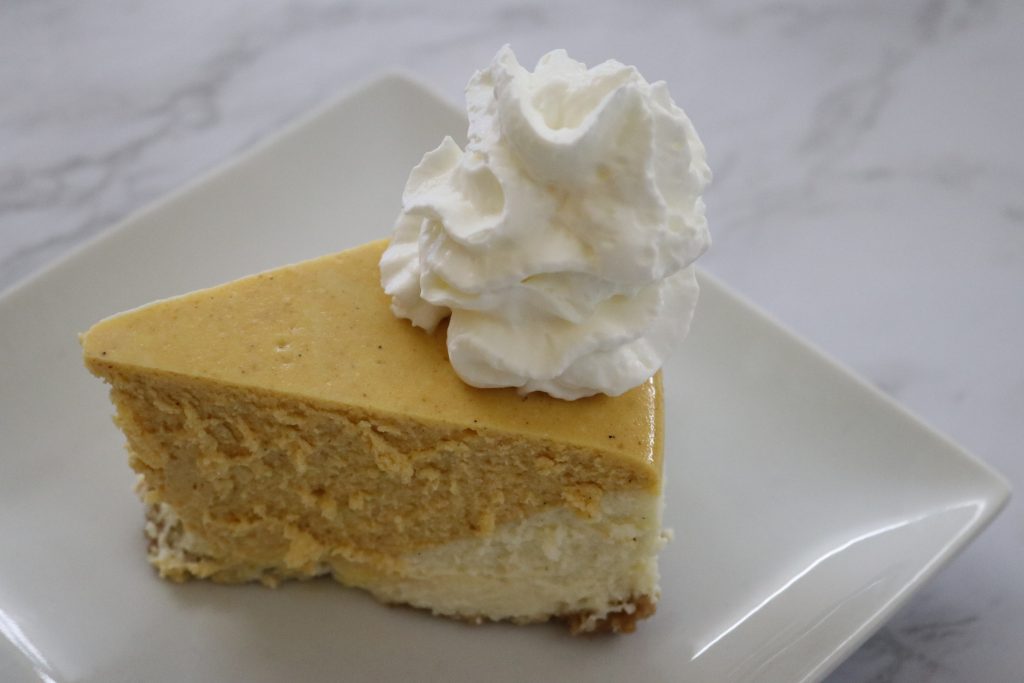 Pumpkin vanilla cheesecake on a plate