We have been making corn chowder for decades, but only recently have we decided to make a chicken version of it. Turns ours, its a winner! Chicken Corn Chowder is a meal in itself. It has chicken and corn (obviously) but it also has celery, onions, potatoes, milk, and seasonings; making it a very hearty soup. Using fresh corn really makes this soup that much better, because it is sweet and uses the watery seeds from the cob. 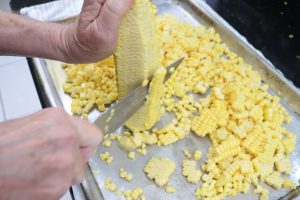 First, you need to cut the corn off the cobs using the sharp part of the knife. It helps if you use a tray to  make it easier to cut the corn and have a place to contain it. 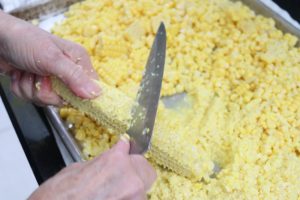 Next, scrape the cobs with the blunt part of the knife, so you could get the watery seeds. 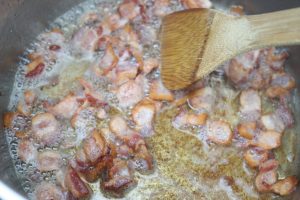 In a large pot, cook the bacon till it is crisp, then place bacon bits in a separate bowl. It is important to reserve the bacon grease because you need it to sauté the vegetables. However, pour out some of the bacon grease if there is too much, leaving just enough to cover the bottom of the pot. 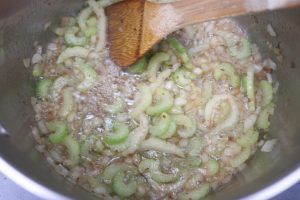 Sauté the onions and celery in the bacon grease, and cook till they are tender. 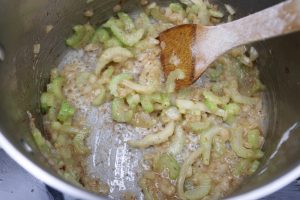 Sprinkle in the flour and give it a mix till its coated like this. 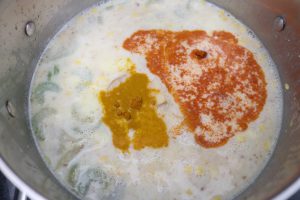 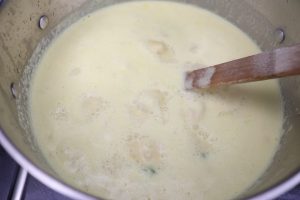 Follow this by adding the broth, corn, potatoes, bouillon cubes, turmeric, and cayenne pepper. The bouillon cubes and turmeric will give the soup a deep yellow hue. Then, let come to a boil and simmer for 20 minutes or until potatoes are tender. 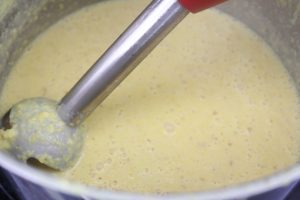 Pour out about half the soup into a separate bowl and, using an immersion blender, puree the soup. Then, pour the reserved soup back in the pot. You can make it as smooth or chunky at this point. The choice is yours. 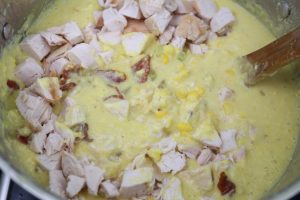 At this point, add the bacon and chicken to the pot and give it a stir. 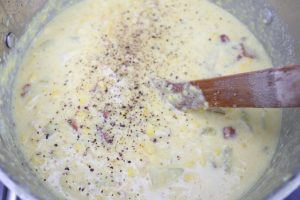 All that's left now is to season your soup with salt and black pepper to your liking. 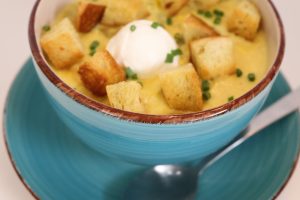 And... if you want to be fancy, you can add croutons, sour cream, and chives as shown here. Bon Appetite! 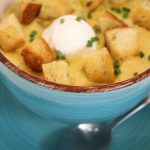 * This recipe also works with frozen corn. If you don't want to use fresh corn, just replace it with 6 cups of frozen yellow corn off the cob and add it to the soup when you would add the fresh corn.